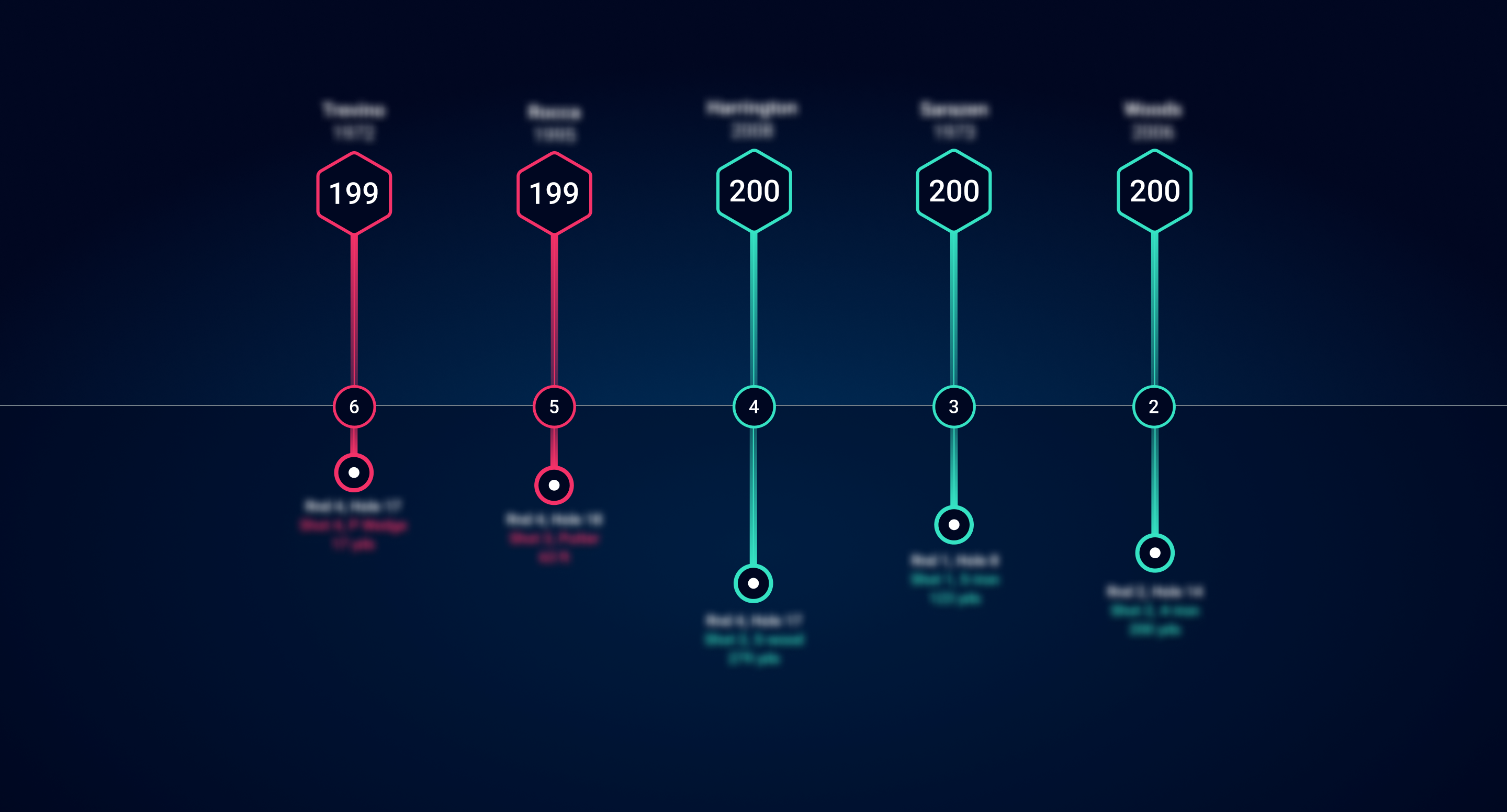 Lee Trevino and Tony Jacklin were out in front on the third day when Super Mex, the reigning champion and winner of two recent US Open titles, suddenly got hot on the back nine. Trevino holed long putts on 14 and 15 before dunking an outrageous bunker shot from a downhill lie on 16, the ball hammering into the hole on its second bounce. Minutes later, he holed another chip from the back of the 18th green.

The two men were paired together again on the final day and were neck and neck coming to the 17th. Trevino proceeded to hook his tee shot left into a bunker. He played out sideways before again hooking his third shot. “I felt like I’d broken him,” said Jacklin. On a bank behind the green in four, facing a downhill chip for par, Trevino looked like he had given up. Taking no time whatsoever, he chipped his ball onto the apron, watched it bounce a couple of times and roll out into the hole for par.

Jacklin duly raced his birdie putt by the hole and then missed the return, a three-putt bogey that gave his rival a lead he would protect up the last. The Englishman would later admit he was never the same player again.

Constantino Rocca knew he needed an eagle on the final hole to win the Claret Jug outright. A birdie would be good enough to force a playoff with 'The Wild Thing', John Daly. The Italian smashed his drive more than 300 yards, his ball finishing just short of the green and leaving an outside chance for glory.

Groans then rose from the packed grandstands when Rocca fluffed his pitch shot into the Valley of Sin. He now needed to hole an enormous putt for birdie to tie Daly. What followed produced one of the most famous images in the history of the game. Rocca putted his ball from just over 60 feet, sending it ball up and over the famous swale and towards the hole. As the ball dropped, so too did Rocca, thumping the ground in relief and jubilation.

This was where the fairytale ended. Daly went on to win the playoff and his first Claret Jug. And yet the signature moment from the 1995 Open – and one of its greatest ever – will always belong to the man from Bergamo.

“He’s two ahead, does he need this risk?” asked the BBC’s Ken Brown in commentary as Padraig Harrington eyed his second shot from the fairway of the 71st hole. The wind was howling off the left and the Irishman, the defending champion, had a full 278 yards left on a par-5 with a long history of deciding Open Championships. Harrington pulled out his 5-wood, addressed the ball and made one of the purest swings of his life.

The ball carried a bunker short of the green and rolled towards the flag, tracing the undulations of the putting surface before stopping three feet away from the hole. It gave him an easy eagle putt that made the walk up 18 a comfortable one. Harrington would later say that he was petrified of Greg Norman, who was lurking just behind him on the leaderboard.

“I knew if I hit this shot, I was taking everyone out,” he revealed. Harrington seized the moment, just as he did a month later when adding the PGA Championship trophy to his collection.

At 71 years of age and with seven majors to his name, Gene Sarazen had played more than his fair share of remarkable golf shots, including the “shot heard around the world”, his albatross on the 15th hole in the 1935 Masters. Thirty eight years later, on the tee of the Postage Stamp, Royal Troon’s par-3 8th hole, Sarazen reflected on how this specific hole had haunted him over the years.

'The Squire' decided on a 5-iron and made the same move he had done for decades. The ball pierced the breeze, landed short of the hole, took a couple of hops and rolled into the hole for an ace. “When the crowd roared I realised the ball was in,” Sarazen told reporters after the round.

The celebrations were modest by today’s standards;  no hooting or hollering, just a few handshakes and a huge smile. “I felt there was no better way to close the books on my tournament play than to make a hole-in-one on the Postage Stamp and call it quits,” he said.

There are many notable aspects to Tiger Woods’ performance at Hoylake in the 135th Open Championship. On a sun-baked links course in warm weather, his game plan was to leave the driver in the bag in favour of irons off the tee for position. He finished the tournament without finding a bunker, calling it “probably the best ball striking week I’ve ever had”.

There is one shot, however, that stands out as one of the greatest in Open Championship history. Continuing with his tactic of playing safely off the tee, Tiger found himself further back than most on the dogleg, par-4 14th hole. After consulting with his caddie, Steve Williams, he decided on 4-iron for his approach from 200 yards. A puff of burnt links turf flew into the air as the ball whistled towards the green, taking three bounces before colliding with the pin and dropping into the hole. The roar from the spectators was unmistakable, telling the rest of the field exactly who was responsible.

The eagle two gave Woods a one-shot lead, one he would not relinquish for the rest of the tournament. The win was particularly significant for Tiger as his father, Earl, had passed away just two weeks before the championship. His tearful embrace with Williams on the 18th green is something that will live long in the memories of golf fans; as will the remarkable shot that helped him to get there.

‍Read on: Shot 1 - The greatest shot in Open history