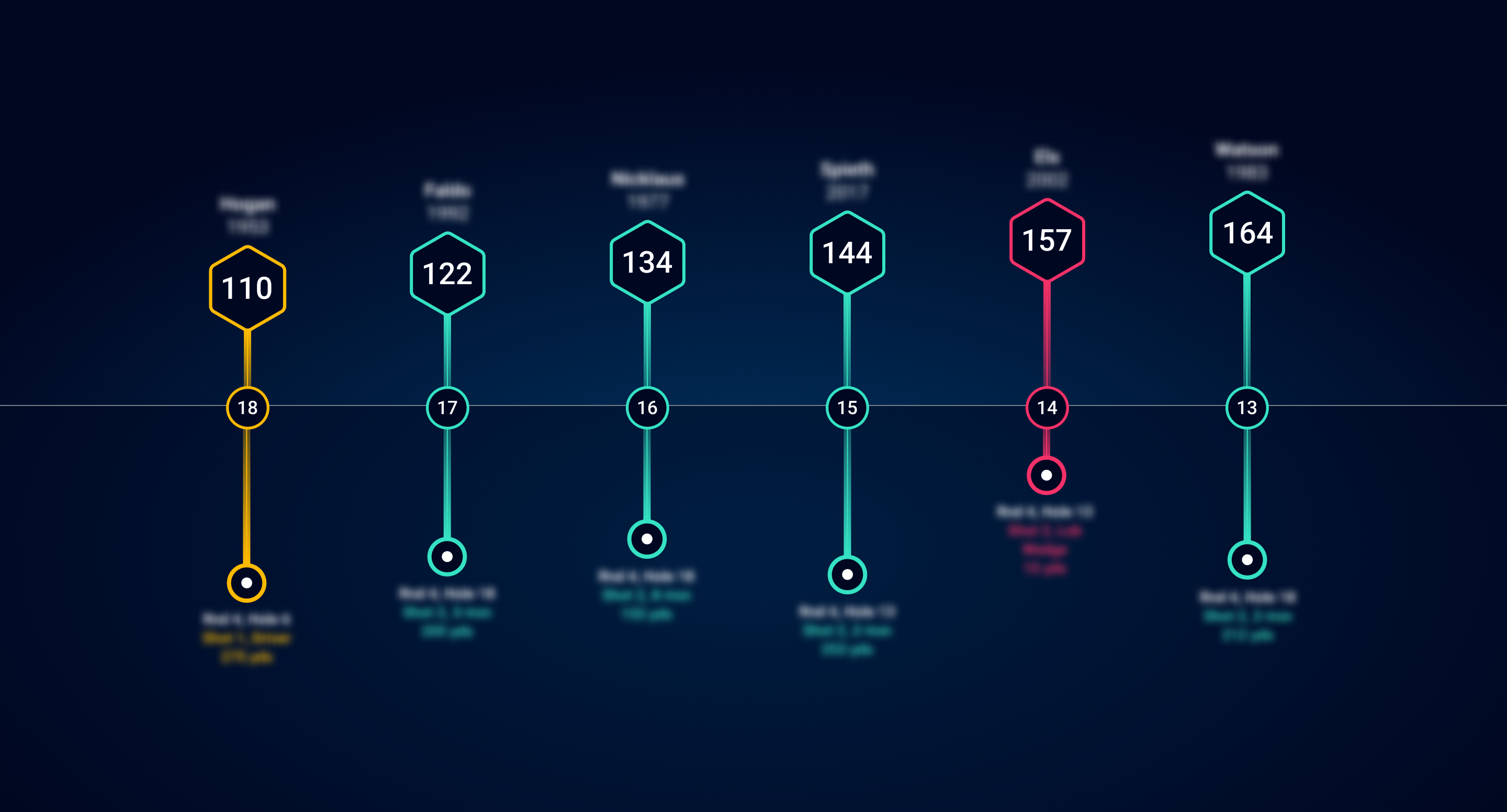 Not many shots in Open history have resulted in the hole it was played on being renamed. However, this was Ben Hogan at his very best. In 1953, four years after the car accident that nearly killed him, and battling the flu, the Hawk visited Scotland for the first and only time to participate in the 82nd Open Championship at Carnoustie.

In each round, the reigning Masters and US Open champion stepped onto the tee of the intimidating 567-yard par-5 6th hole, felt the prevailing wind in his face and then powered his Titleist through the narrow gap between bunkers in the fairway and the out of bounds fence on the left. It was a showcase of ball striking prowess that left the Scottish galleries gasping in admiration.

Leading by one shot in the final round, his fourth consecutive laser-like drive on the 6th set up a birdie that moved him further ahead. Hogan closed with a 68 for a four-shot victory. Legend has it that his driving on the 6th was so unerringly accurate that he played his second shots out of his own divots from the previous day. The 6th hole at Carnoustie is now known as ‘Hogan’s Alley’.

“I told myself I had to forget about the whole week and play the best four holes of my life,” reflected Nick Faldo on the dramatic closing stages of his third Open Championship win. Reaching the turn on the final day, the four-time major winner and pre-tournament favourite stood four shots ahead of his closest challenger, John Cook.

A string of bogeys and some great play by Cook, however, saw the American go two clear with three holes left to play. Playing behind, Faldo birdied the 15th to narrow the gap and then Cook missed a short birdie putt on the par-5 17th. Faldo made his birdie four on 17 before a Cook bogey on the 448-yard final hole opened the door.

Standing over his ball on the 18th fairway with a one-shot lead, Faldo had 197 yards to the hole. He was breathing heavily but his 3-iron was flushed, his ball narrowly missing the flag before coming to rest just off the back of the green. After two-putting from 24 feet for victory, Faldo was overcome by emotion. “It’s the enormity of it all,” he croaked. “The pressure was so great. It went from almost a total disaster to the absolute ultimate.”

In what’s widely regarded as the most thrilling Open Championship in modern history, Jack Nicklaus and Tom Watson went toe to toe at Turnberry in a contest immortalised as ‘The Duel In The Sun’. After lapping the field, they arrived on the 18th tee in the final round with Nicklaus trailing his playing partner by one shot.

Watson found the centre of the fairway with a 1-iron, so Nicklaus felt compelled to reach for his driver. When his ball flew right and ended up at the base of a bush in long rough, his chance appeared to have gone. Jack had other ideas, though, and summoned every ounce of his famed power to launch an 8-iron 168 yards onto the green, short of the pin, before sinking a monster birdie putt to ask one final question of Watson.

Englishman Tommy Horton, who finished ninth, was watching from behind the green. “'How does he do it?” Horton asked the other players around him. “They couldn't hear me. I could barely hear the words coming out of my own mouth.” Ultimately, Nicklaus’ miraculous shot was not enough to deny Watson his third major title and second Open crown.

The new poster boy of American golf had already cemented his reputation as a thrilling and quite brilliant shotmaker before arriving at the 146th Open Championship at Royal Birkdale in 2017. But what happened during the back nine of his final round was utterly ridiculous, even by his own extraordinary standards.

On the 13th tee box, Spieth was at 8 under par, tied with Matt Kuchar. But the Texan sprayed his tee shot way right into the dunes. He decided to take an unplayable drop and a 15-20 minute discussion with a rules official ensued as to where he would be playing the next shot from. They finally agreed on the practice range and Spieth smashed a 2-iron to just shy of the green.

Whilst there’s a case that this wasn’t even the best shot he hit in the round, what followed shows the importance of this long recovery shot on the 13th. Over the final five holes, Spieth went birdie, eagle, birdie, birdie, par, including the famous “Go get that!” putt. It was good enough for victory and his third major title.

For the first 12 holes of the final round in the 2002 Open at Muirfield, Ernie Els felt in complete control of both his swing and the tournament. However, on the 13th hole, a notoriously tricky par 3, he admitted feeling anxious for the first time.

Throughout his career, The Big Easy had struggled with occasional bouts of “the lefts” and, faced with a shot that he needed to land 20ft to the right of the pin, he tugged his ball into a steep-faced pot bunker to the left of the green. With the ball close to the face and sitting down, getting out of the bunker looked like a tall order. Aiming 10 yards left of the hole, the South African popped the ball out and watched it take the contours and roll across the green to finish a foot away from the hole.

The shot, which Els describes as his greatest, would prove to be pivotal. Fighting his own game, he managed to finish in a four-way tie at the top of the leaderboard before summoning his deepest reserves to come through a four-hole playoff and then beat Thomas Levet in sudden-death.

The defending Open champion started the final day at Royal Birkdale in the lead. The course was dry, the weather was steamy but the greens, which had been heavily watered, were slow. Watson had been a factor throughout: T2 after round one, he then led after 36 and 54 holes. Despite being the overwhelming favourite, the 33-year-old made a bad start to the final round before rallying on the back nine with birdies on 11, 13 and 16. When he failed to birdie the par 5 17th, it meant he needed to par the formidable 473-yard par-4 18th to win by one.

The American hit a perfect drive 260 yards onto the fairway and then striped "the best 2-iron of my life",  a shot he described as the finest he ever hit at the Open. It covered the flag all the way, although Watson didn't see it land because he was engulfed by the record crowds. His ball came to rest 18 feet short of the flag and he safely two-putted for the win.

After claiming the title on four different Scottish courses Watson had finally won an Open in England. It put him alongside James Braid, JH Tayor and Peter Thomson as a five-time Open champion, just one behind Harry Vardon.