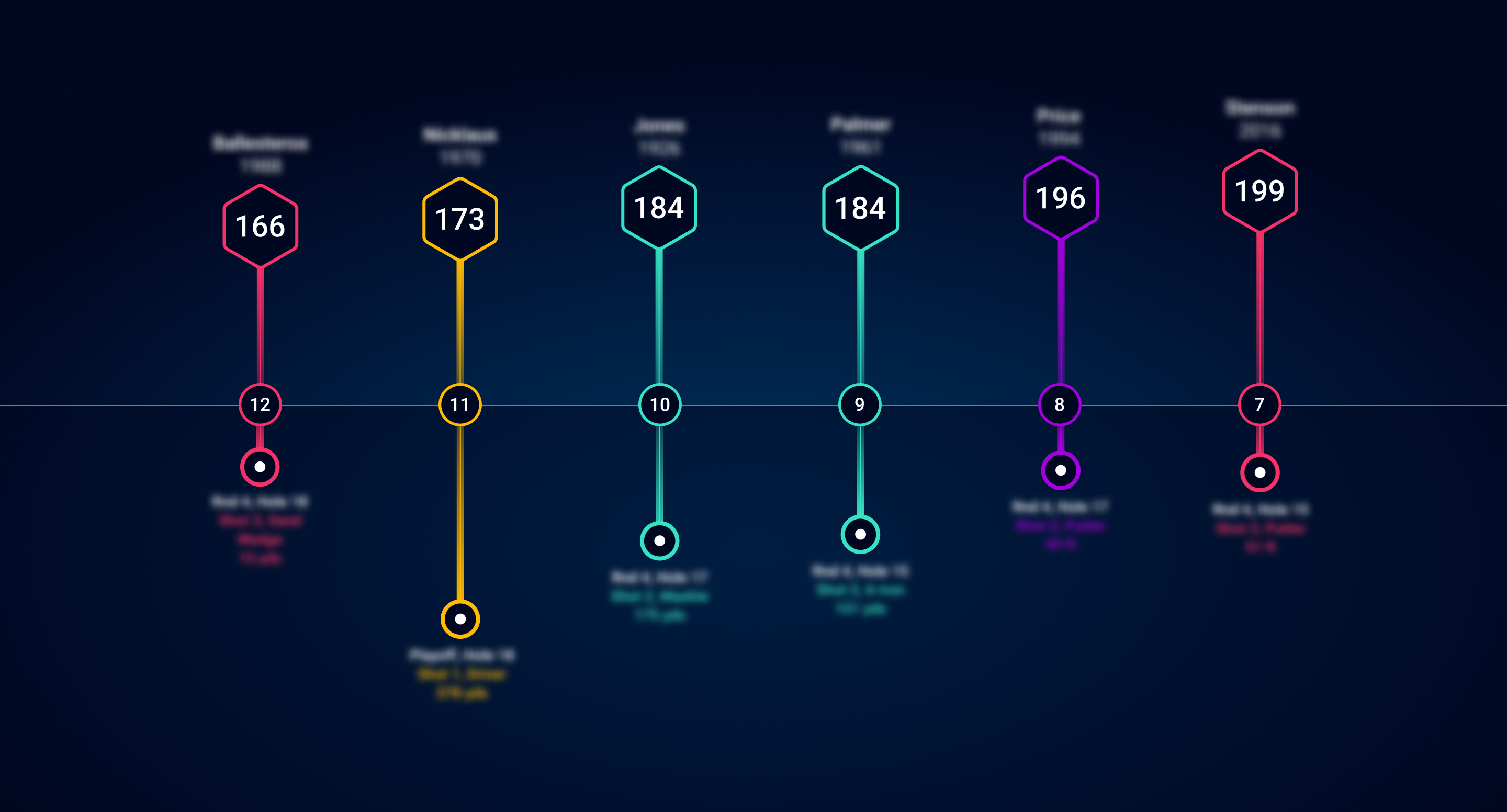 “With the special feeling I have here – this feeling in the blood – this could be the time I win another major,” declared Seve Ballesteros on the eve of the 117th Open Championship at Royal Lytham & St Annes. And he was right.

After a complete wash out on the Saturday, competitors played their final round on the Monday. Seve was out in the final group alongside Nick Faldo and the overnight leader Nick Price. Having won his first Open on the same Lancashire links in 1979, the mercurial Spaniard channelled the vibes he felt to play one of the greatest closing rounds in the championship’s history. He and Price produced a scintillating display of shotmaking with the Spaniard holding a one-shot lead as they walked down the 18th fairway.

His drive was slightly pushed and his second shot found a hollow to the left of the green. The ball was not lying well but Seve knew exactly what to do. He popped the ball up and watched as it rolled across the green, kissed the edge of the hole and came to rest a matter of inches away. When Price failed to nail his birdie putt, Severiano Ballesteros Sota, who had closed with a 65, was confirmed as the Champion Golfer of the Year for a third time.

Jack Nicklaus shouldn’t have had the opportunity to lift the Claret Jug at St. Andrews in 1970. Famously, Doug Sanders only needed a par on the 72nd hole to win the 99th Open Championship but a missed putt from three feet consigned him to a playoff with The Golden Bear.

The next day, Nicklaus arrived on the 18th tee with a one shot lead and the wind lapping at his back. He decided to go in for the kill, removing his sweater and swinging his driver with everything he had. The ball came right out of the screws, landing short, then running up and onto the green before settling towards the back, 30ft away from the hole. Nicklaus got down in two for birdie and his eighth major title at the age of 30.

The joy he felt after draining the winning putt prompted a rare show of emotion as Nicklaus tossed his putter high in the air before it almost landed on Sanders’ head! “If you’re going to be a player people will remember, you have to win The Open at St. Andrews,” the champion would later say. We think it’s fair to say Jack Nicklaus would’ve been remembered regardless, but the first of his two Open wins at St. Andrews further cemented his place in the pantheon.

“The sensible shot was to play out sideways or a few yards forward then hope against hope that an outstanding third shot might save the day,” wrote legendary golf writer Bernard Darwin. “Jones considered this option but not for too long. He had come all this way to win, not to finish second.”

After hooking his tee shot into scrubby wasteland on Royal Lytham’s 17th hole, and with his playing partner, Al Watrous, safely on the green, Jones’ chances of winning his second Open Championship appeared remote at best. From where he was, he couldn’t see the green but he knew that he needed to carry the ball 175 yards and then get it to stop quickly.

The Georgian amateur pulled out his Mashie Iron and hit one of the purest golf shots in history to put his ball inside that of his competitor. Watrous went on to three-putt and Jones was crowned champion shortly after. “I played the shot and it came off,” was his typically modest verdict.

Few players in the history of The Open have had such a transformative effect on the competition as Arnie. His first appearance in the championship, which came the previous year, captured the attention of the public as well as his fellow Americans, who subsequently started making the trip over to compete in golf's oldest major.

The 1961 championship was blighted by horrendous weather and yet ‘The King’ came out on top, beating Welshman Dai Rees by one shot. This slimmest of winning margins came down to one shot on the 69th hole of the tournament. After an offline drive, Palmer’s ball was found nestling at the base of a bush, buried in the thick Birkdale rough.

With Rees making three birdies to finish his round, the pressure was now on. Palmer reached for his 6-iron and swung with all his might. A huge divot, dust and assorted detritus flew into the air before the ball landed on the green 151 yards away, allowing him to two-putt for a vital par. “I saw the opening,” Palmer told The New York Times. “I was sure I would make it. Nobody else was.”

Coming into the 1994 Open Championship as the third-ranked player in the world, and with a major to his name, Nick Price was many pundits’ pick. However, as he walked towards his ball on the green of the par-5 17th in the final round, he trailed Sweden’s Jasper Parnevik by two shots.

Needing something miraculous, the Zimbabwean stalked his long eagle putt, judging the line and distance before sending it rolling across the putting surface. Tracking towards the hole, the ball took a slight detour off a spike mark and then dropped. The Zimbabwean leapt into the air and unleashed a fist pump to celebrate his unlikely eagle.

Parnevik went on to bogey the 18th hole and Price became the Champion Golfer of the Year. “In 1982 I had my left hand on this trophy,” he’d later say of previous close calls at the Open. “In 1988 I had my right hand on this trophy. Now, at last I’ve finally got both hands on it, and does it feel good!”

In a final round that was reminiscent of the ‘Duel in the Sun’ 39 years earlier, Henrik Stenson and Phil Mickleson went toe to toe, obliterating the rest of the field with a ball-striking performance for the ages. “We were energising each other,” said Mickelson. “We were focussing even harder and bringing out our best golf.”

The pair finished 14 and 12 shots respectively ahead of third placed JB Holmes. It was not until the 15th hole that Stenson was able to land the decisive blow. On the green in two but some 51 feet away from the hole, the Swede would have likely taken a two-putt for par. But he was playing the golf of his life and nothing seemed impossible on this particular Sunday and after snaking across the green his ball fell into the cup with its final roll.

“The adrenaline was amazing,” says Stenson, who wondered how he was ever going to calm down enough to play the final three holes. He managed, birdieing two of them to earn his maiden major victory. His 63 remains the lowest final round by a champion.